“I use Thaumaturgy to open all the windows”
Laura Bailey

If you’re a Critter and a Cosplayer, you’re going to know the name Ginny Di. Ginny is a fantastic cosplayer/singer from the United States who recently discovered Critical Role and earned the love of Critters and the Cast with her amazing Jester cosplay and song based on the Ruby of the Sea character. Join us for a chat with Ginny about how her songs come about, dealing with con crunch and more crucially, the importance of being a positive voice on social media. 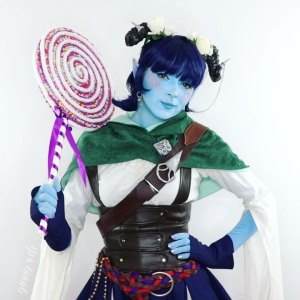 1, Could you please Introduce yourself, tell us a little about your interests.
Hi! I’m Ginny Di. I’m a professional cosplayer, YouTuber, and singer from Denver, Colorado. I’ve always been the sort of person who, when introduced to something I enjoyed, wanted to put my hands on it and make something new with it — be that fanfiction, fanart, roleplay, and now cosplay and music. Since discovering Critical Role, I’ve been enthusiastically turning that drive towards my favorite characters and concepts from the show!
2, How were you introduced to Critical Role?
I had a few friends recommend it, but at first, it didn’t seem like it would be my cup of tea. I had zero experience with DnD, and three- to four-hour weekly episodes sounded like a huge commitment. But since I work from home and I spend a lot of time doing “mindless” tasks like photo editing and sewing, I decided to download a few episodes of the podcast version and start listening. It only took a few episodes of Campaign 1 to get me hooked, and when I decided to jump ahead to get caught up on Campaign 2 first, that’s when my love for the show was fully cemented.
3, How did you start cosplaying?

I’ve been sewing since I was very young, and always loved making costumes for Halloween or the Renaissance Festival, but didn’t really know about cosplay until some friends took me to my first local convention. Once I realized people could make costumes whenever they wanted, I was completely hooked. I made my first cosplay for that same convention the following year, and I haven’t stopped making them since!

4, Your Songs are amazing, do you have a process with how you come up with them or are they largely improvised?
Thank you! Ruby of the Sea is actually the first original song I’ve ever released — I’ve only done parody and cover songs before that. But since then, I’ve been writing a ton of Critical Role stuff!! It may be a stretch to claim I have a “process” yet, but so far I mostly just think of a line or a concept and then sit down with a notebook and a rhyming dictionary and test stuff out. As of right now, I have seven Critical Role songs in my notebook: One of them is Ruby of the Sea, three of them are less than four lines, and three more I’m actively working on with my friend who does all my instrumentals. Who knows which ones will end up working out!
5, How do you handle the dreaded con crunch?
I made a video about this, actually! The ideal way to handle it is to prevent it by planning properly and pacing yourself, but if you absolutely can’t avoid it, I think it’s important to prioritize the things that make the costume wearable, ask for help if you can, and just don’t force yourself to do it if it’s going to ruin your con experience.
6, If you were to describe Critical Role to a friend, how would you do so?
I’ve been doing a lot of describing Critical Role to friends lately! I usually explain that it’s voice actors playing a live game of DnD, and that since they’re all actors and excellent storytellers, it’s very immersive and often feels like a character-based comedy or drama show. Sometimes I’ll namedrop the cast (“You know, McCree from Overwatch!! Jaina Proudmoore from World of Warcraft!”), and often I’ll finish with “…I know it might not sound like it would be good, but trust me, it will change your life.”
7, Everyone has favorite moments from Critical Role but do you have a moment that always stands out to you that affected you personally (Either from the show or in cosplay at a event)?
There have been so many moments in the show that have stuck with me, whether because they’re hilarious and perfectly executed, or because they’re emotional and raw. I’ve cried while watching Critical Role, I’ve laughed out loud to myself like a maniac in my car, and Grog’s match with Kern the Hammer in the fighting pits made me truly understand how sports fans feel watching a game!! Most recently, I was really struck by the subtle but emotional scene where Jester and Fjord talk while watching the jellyfish. As someone who often feels pressure to perform positivity online, even when I don’t feel it, watching Jester struggle with expressing (and even suppress) her more difficult emotions is really relatable for me, and I’m really hopeful that it’ll be addressed as part of her long-term character arc. 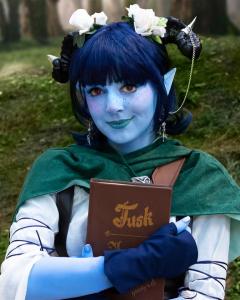 8, Have you played DnD and which character do you currently play?
I’ve played a few one-off attempts that never really panned out, unfortunately. I haven’t found the right group of people yet, but I hope to be able to pull something together soon!
9, If money was no object, is there a character from Critical Role you would love to cosplay?
I don’t mean this like it’s going to sound, but… money isn’t really an object for me. Not because I’m rolling in it or anything, but because since this is my full-time job, I can choose to invest in a costume without feeling like that money is being misused or wasted. Plus, I have a lot of experience finding budget-friendly ways to do nearly any costume! If anything, the only thing preventing me from making the other Critical Role costumes I want to make is time. I have a list of costumes as long as my arm that I want to make, but only so many hours in the day!! As it stands, I have a vague idea of what I want my next Critical Role cosplay to be… but not a solid enough one that I’m ready to announce it.
10, Do you watch any other DnD podcasts? if so, which ones?
Nope! People keep recommending The Adventure Zone to me, though, so I’ll probably tackle that one next, when I’m caught up on Campaign 1 of Critical Role.
11, If you met a member of the cast, what would you tell them?

In reality, when I meet the cast next year, I’m probably just going to babble or be awkwardly silent. But if I can keep my wits about me, what I’d most want to tell them is that Critical Role is the kindest, warmest, most hope-inspiring show I’ve ever seen, something that so many of us desperately need right now, and I’d want to thank them for bringing it to life and putting their whole hearts into it. They’re making a real difference in people’s lives and I hope they know it. 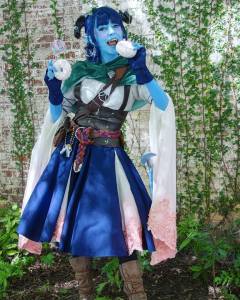 12, Would you like to give a shout out to other cosplayers or crafters who inspire you?

Oh geez, the list would be a million miles long — I’m inspired by the whole Critter community, from cosplayers to illustrators to musicians and beyond, not to mention the non-Critter cosplayers whose work I love. I will say that Pearl Bae’s Jester costume walkthrough was a fantastic and informative starting point for my own cosplay. Her Jester is flawless and really inspired me to step up my crafting game!

13, You’re very outspoken on a great deal of important subjects and you use your platform to help or inspire others. Has there been a moment you’re proud of where you’ve helped someone?
Every single time I’ve been able to help someone, whether through something as simple as a costume tutorial or something deeper, like my openness about body image and insecurity, it’s a forceful reminder about what’s truly important about cosplay and creation. It’s so easy to get lost in follower counts and view counts and print sales, but every time I’ve been lucky enough to hear someone say that I inspired them to cosplay or that I made them feel more confident about themselves, I’m so grateful for the little mental note to recenter on what really matters. I’m proud of and thankful for every connection I’ve made with someone who comes away from my work happier, or more informed, or more energized.
14, If you could impart some cosplaying wisdom to someone at the start of their cosplay journey, what would it be?
Don’t waste time being scared to start. No matter what skills you have or how confident you are, you’ll constantly grow and improve over time. There’s no such thing as being “ready” — it’s a journey, not a destination, so the sooner you start, the better! 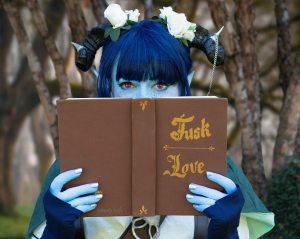